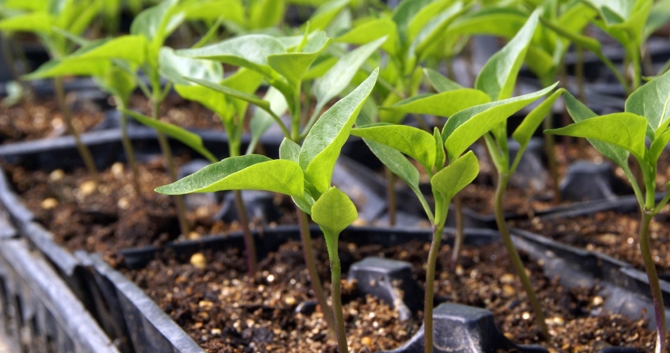 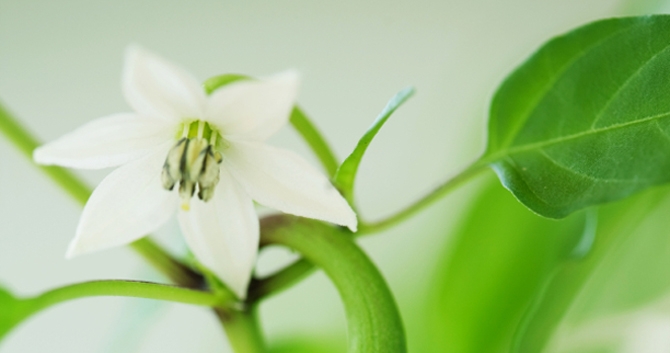 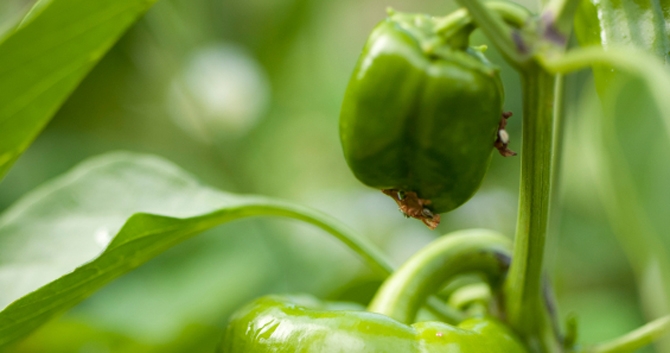 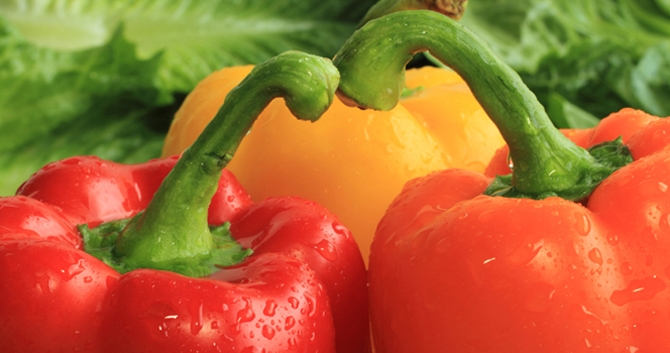 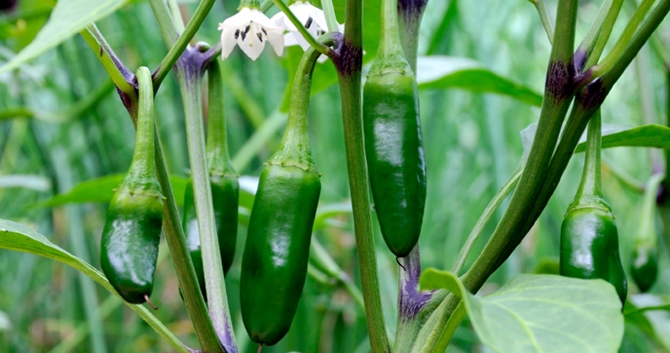 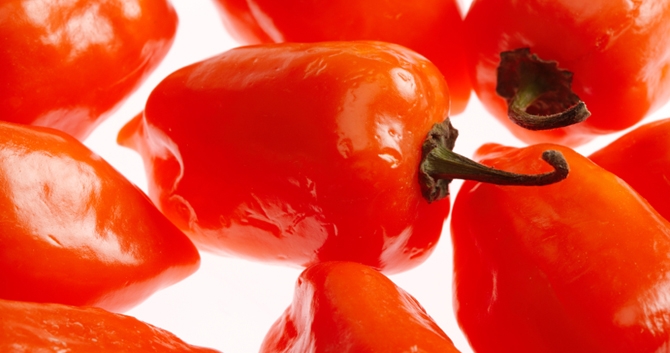 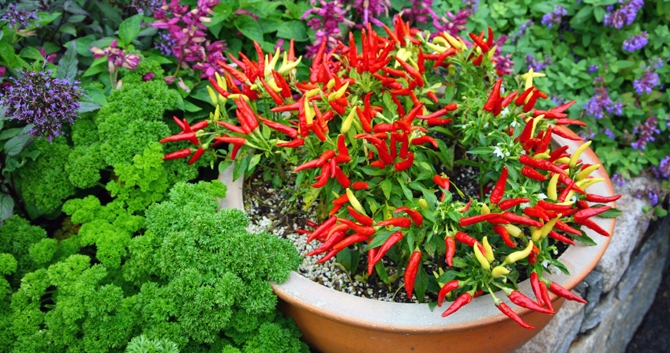 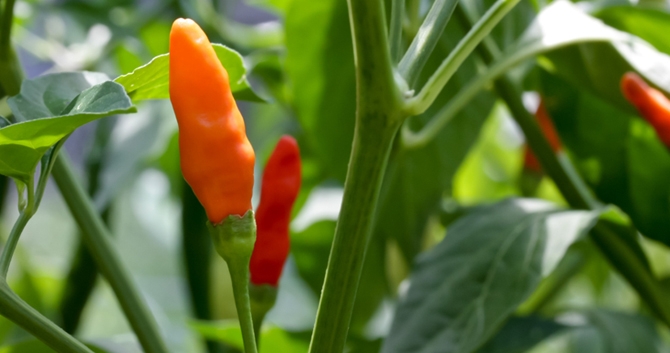 Peppers are one of the most rewarding garden vegetables to grow with flavors that range from sweet to scorching hot and everything in between.  Their small white flowers transform into perfectly proportioned miniature replicas of the mature version, finally swelling to picture-perfect peppers.

They’re one of the easiest vegetables to grow in garden beds or containers and a great way to sample novel varieties that add fresh flavor and color to any recipe. With a few simple tips, you’ll be rewarded with healthier and more abundant peppers to enjoy all summer long.

When it comes to peppers, there’s an amazing variety to choose from in terms of colors, shapes, and sizes. Fundamentally, they’re grouped into either sweet or hot varieties - if you have the room, it’s well worth growing some of each!

The heat in peppers comes from capsaicin and is measured according to the Scoville Heat Scale (see sidebar). Sweet, mild peppers, like bell and cherry peppers are at the bottom of the scale with little to none of this fiery compound. As you move up the heat index, there are moderately hot varieties like serranos, Hungarian wax peppers, and red cayenne peppers. Topping the scale are the ghost pepper and the Trinidad Scorpion, which will quite literally bring tears to your eyes.

It’s a good idea to sample hot peppers from the grocery store or farmer’s market before planting to get a sense of how much heat you prefer. Some popular types, listed in order from sweet to scorching are as follows:

Pepper come in a wide range of colors, shapes, and sizes

Sweet: Sweet peppers fresh from the garden are a summer treat best enjoyed lightly dressed in salads or vegetable platters. Some favorites among cooks and gardeners include:

Warm: To add a little more dimension to your pepper plot, try these mild types that perfectly blend sweet and spicy flavors.

Cubanelle Peppers (0 to 1,000 Scoville units) also known as Cuban peppers have a sweet flavor. These long, tapered, glossy peppers have a thick skin that starts out pale green, then ripens to red when fully mature. They're delicious in salads, sandwiches, and main dishes.

Anaheim Peppers (500-2,000 Scoville units) also known as green chilies are one of the mildest varieties, ranging in flavor from sweet to slightly hot. Maroon in color and growing to six inches long, they spice up egg dishes, vegetables, and stews. Their skin peels off easily if charred and steamed in a paper bag.

Poblano Peppers (500-2,500 Scoville units) are extremely popular in Mexico where they’re stuffed, fried, or used in sauces to add a deep rich flavor. They grow to about 4 inches long, starting out purplish green, then turning to a dark red-black as they ripen. When dried, they are known as ancho chilies.

Cascabel Peppers (1,500-2,500 Scoville units) have a moderately sweet, nutty flavor with a little touch of heat. These small round peppers work well in stews and sauces.

Hot: If you want to venture into hotter flavors without scorching your taste buds, these types that range from 2,500 to 15,000 on the Scoville scale will add a moderate kick.

Jalapeños (2,500-5,000 Scoville Units) have a slightly smoky flavor that ranges from sweet to mild to hot. They grow to about three inches long, starting out green and ripening to a bright red color. When smoke-dried, jalapeños are known as chipotle peppers. These are the peppers used to make Sriracha sauce.

Fresno Peppers (2,500-10,000 Scoville units) take things up a notch. Similar in size and shape to jalapeños, but they are much hotter. They grow to about 2 inches long, starting out bright green and maturing to orange or red. With thin tender walls, they are great in salsa, but don’t dry well.

Hot Banana Peppers (5,000-15,000 Scoville units) are also known as Hungarian Wax Peppers. Don’t let their light yellow-green appearance fool you, these peppers have game. If allowed to ripen they mature to a rich red color. Toss them uncooked into salads, pickle them, or add them to stews. These are often used as a substitute for Thai yellow chili, which can be difficult to find.

Banana peppers turn from yellow to a rich red color as they mature.

Intense: Ready to really turn up the heat? Look for types that range from about 15,000 to 50,000 on the Scoville scale. These peppers have a searing bite that isn’t for the faint of heart.

Chili de árbols (15,000-30,000 Scoville units) are small, extremely potent peppers. They start out green then ripen to a bright red color. They may be used fresh or dried.

Red Cap Mushroom Peppers (30,000 Scoville unit) are an heirloom variety that combines fruity and spicy flavors. These bell shaped chilies grow to about the size of a golf ball and ripen from lime green to bright red. They’re especially good for picking or drying.

Cayenne Peppers (25,000 to 50,000 Scoville units) are extremely pungent, even when small. They grow to 6 inches long and come in green or red varieties, of which the red are hotter. Cayenne peppers are widely used in sauces and salsa, and are preserved by either drying or pickling.

Tabasco Peppers (30,000 to 50,000 Scoville units) are famous for the sauce of the same name. Their small 1½ inch pods start out green and turning bright red. Unlike other peppers, tabasco peppers grow pointing updwards and are not dry inside.

Scorching: Keep the fire department’s number handy if you venture into the top of the Scoville scale. These varieties are in the five-alarm category:

Thai Chilies (50,000 to 150,000 Scoville units) pack an incredibly fiery punch for their small size and should be used sparingly. Only 3/4 inches long, they range in color from red to green when fully mature.

Scotch Bonnets (325,000 Scoville units) are popular in the Caribbean, packing twice the heat of jalapeños or serranos.

Habanero Chiles (100,000 to 350,000 Scoville units) have a fiery flavor that’s not for the timid. They are one of the most popular of the hot varieties, with fruity undertones of apple and tomato flavors. These small, lantern-shaped chilies grow to about 1 inch long, starting out green then ripening into orange, red, white, brown, or even pink. They're often puréed and used in salsa.

Thai Chilies pack in incredibly fiery punch for their small size and should be used sparingly.

Ghost Peppers (over 1,000,000 Scoville units) are legendary as one the hottest varieties in the world. They have an intense heat that will leave your mouth burning for at least 30 minutes.

Trinidad Scorpions (over 1,500,000 Scoville units) are currently the most potent variety in the word, grown by extreme enthusiasts who like to push the limits. Exposure to the eyes during handling can cause temporary blindness. Chemical masks and body suits are recommended during cooking to protect against fumes.

Peppers are warm weather plants that do best when temperatures are between 65 and 75 degrees Fahrenheit. It’s a good idea to start peppers early and transplant two to three weeks after danger of frost has passed. This ensure that the soil has warmed, but still leave time for plants to set their blossoms before the weather gets too hot in late summer.

A little preparation before planting will simplify care and maximize results. Choose a site that gets at least 6 hours of sunlight a day. Make sure that the hose or sprinkler reaches the site so you can easily water plants regularly.

Peppers tolerate a wide range of soils, but do best if they have a good start. Before planting, remove debris and loosen the soil, breaking up any clumps that are larger than an apple. Add compost or other organic garden mix to improve fertility and promote good root growth for a healthy plant.

Both sweet and hot peppers are easy to grow, requiring little care other than watering and weeding. Following these few simple care tips will ensure a bumper crop throughout the summer.

Planting: Space plants 18 to 24 inches apart, leaving two to three feet between rows for walking and weeding. Plant just deep enough to cover up to the soil line of the container - planting too deep will inhibit growth.

Watering: Sweet peppers thrive in moist well-drained soil and may become bitter if they don’t get enough to drink. Water regularly, especially during the harvest season and dry periods. Hot peppers are less demanding, preferring water only when their leaves begin to wilt. Too much water mellows their flavor, leading to a milder flavor than expected.

Mulching: Surround the plants with about an inch of mulch to keep the soil evenly moist and reduce weeds. Never pile mulch against plant stems, as this can promote disease.

Fertilizing: Peppers need little fertilizer until they begin flowering. Too much nitrogen when plants are young will promote foliage growth at the expense of blossoms and fruit. When plants are in full flower, ensure that nutrients are in the right balance for a bumper crop by applying a fertilizer formulated for vegetables – following package directions carefully.

Staking: Bell peppers and other large-fruited types may need support once they begin producing. Once loaded with three or four fruits, plants may lean over and could snap at the base. Insert stakes when planting seedlings so as not to disturb the roots later in the season. Use a three to four foot stake, tying the plant to the stake as it grows – use soft fabric to avoid cutting into the stems.

All peppers may be harvested at any size desired. However, bell peppers are usually sweetest when fully mature and hot peppers get more intense as they ripen. Use shears to remove the peppers to minimize the risk of damage to the plant from tugging and twisting.

When handling hot peppers be sure to wear gloves so you don’t get any oils on your hands and inadvertently rub into your nose or eyes causing them to sting.

Take advantage of plants that grow well with peppers to deter pests, enhance flavor, encourage growth, or improve health. The following plants are beneficial to peppers:

Conversely, there are a number of plants that don’t make good neighbors for peppers, inhibiting their growth or attracting unwanted pests. Steer clear of planting any of the following too close to peppers:

Onions make an excellent companion plant for peppers, using the space between plants.

Peppers and tomatoes need similar growing conditions and do well when planted together in the same plot.

Peppers are easy to grow and have few challenges – and those are generally brought about by wind, weather, sunlight, watering, or pests. These circumstances can be hard to control, but their impact is often merely cosmetic, temporary, and easily remedied.

Peppers shut down flower production when daytime temperatures soar above 90 degrees or nighttime temperature drop below 60 degrees, and plants may drop their flowers to conserve energy. Keep soil moist during hot weather to reduce stress on the plants. They should resume flowering once temperatures cool.

Intense sunlight can cause peppers to develop thin, wrinkled, dry spots that become white and papery. Plants usually shade their own fruits, but if plants are damaged or the weather changes suddenly and peppers begin showing signs of stress, build a frame to shade them from the hot afternoon sun.

Inspect plants frequently for any signs of pests or diseases, and treat promptly. Most insects can be controlled organically with insecticidal soap spray, and diseases avoided by providing plants with optimal growing conditions.