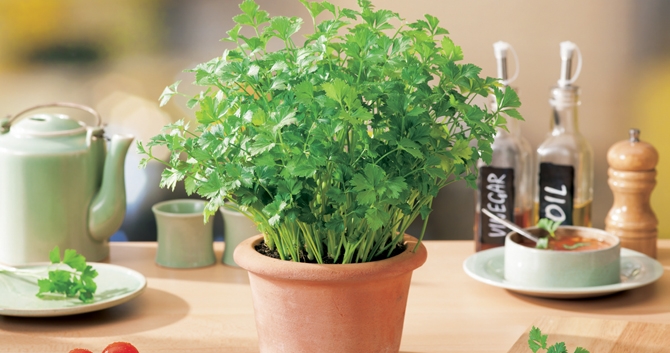 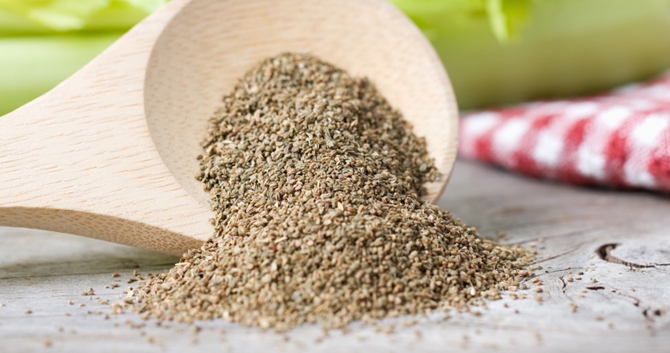 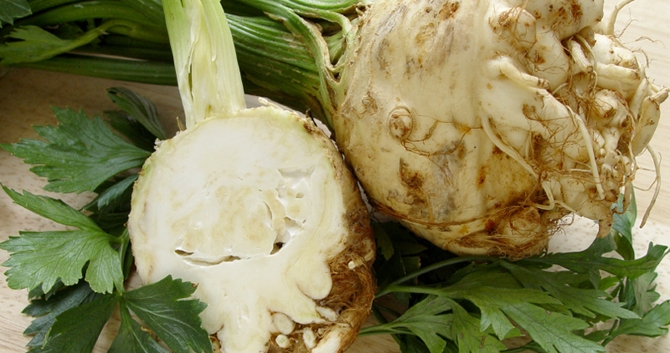 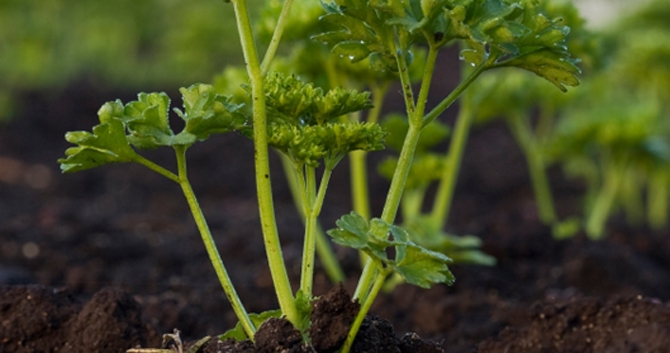 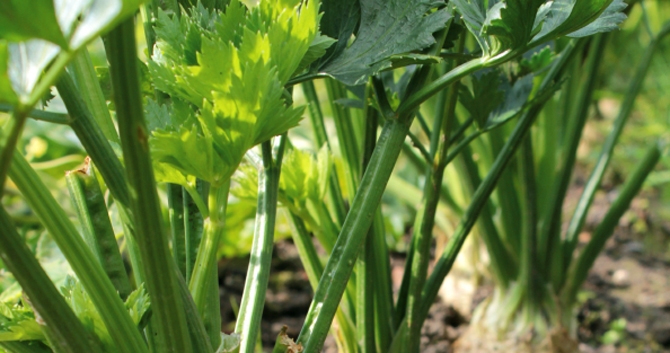 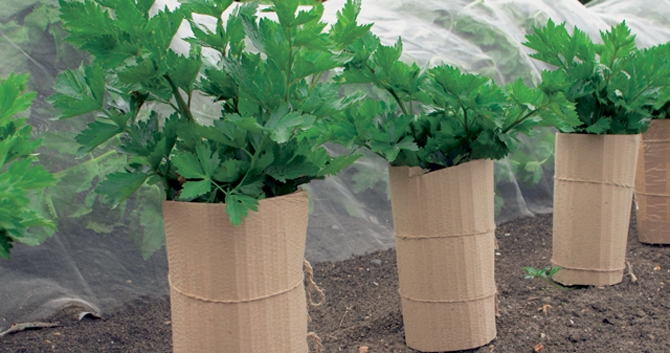 Celery is an indispensable ingredient in any kitchen, embraced for its distinctive flavor and versatility. Unlike most other vegetables, nothing goes to waste with celery -- all parts of the plant are edible, including the crisp stalks, feathery green leaves, aromatic seeds, and even the bulbous root.

The celery we know today is a descendant of wild celery, which has fewer stalks and more leaves. Originally from the Mediterranean, it thrives in marshes and tidal tributaries where the water is salty and the soil is sandy. Wild celery was domesticated by the Italians in the Middle Ages, after they discovered how to mellow the bitter flavor by growing it in cooler conditions and preventing sunlight from turning stalks green (blanching).

Celery is a tender perennial plant that belongs to the Umbelliferae family along with carrots, fennel, parsley and dill. Three kinds of celery are cultivated for culinary use, one for the stalks, another for the leaves and seeds, and a third for the roots:

Pascal celery is grown for it's crisp stalks and distinctive flavor

Most garden celery is grown for its large, crisp stalks harvested from the base of the plant. The two most popular types of stalk celery are green and yellow, distinguished by taste and growing methods.

Green celery (aka Pascal or trench celery) is the common variety found in grocery stores. It has a long curved stalk topped with a small bunch of green leaves. It has a strong flavor and fibrous texture that maintains its crunch during cooking. Pascal celery is grown in trenches so the stalks can be blanched toward the end of the growing season.

Yellow celery has a milder taste and paler color than green celery. It is a self-blanching variety which doesn’t require the extra step of covering the stalks.

Celery leaves are too often forgotten and end up in a compost pile instead of on a plate. Leaf celery (aka smallage, cutting celery, or Chinese celery) is closely related to wild celery. It has a stronger, more assertive flavor than the stalk varieties and adds more depth of flavor to soups, sauces, and stews. It can also be used as a garnish in place of other herbs like parsley or cilantro.

Leaf celery looks like a larger version of Italian parsley, with tall, thin, hollow stalks. The stalks can be tough and fibrous and are better used for making stock than for eating raw. Leaf celery is easier to grow than stalk celery.

Celery seeds add a delicate celery undertone that is similar to anise or fennel. Cooks use it in pickling, curry blends, bouquet garni, salad dressings, and soups.  Although all celery plants form seeds, not all celery varieties are used for seeds. Since celery stalks become woody and unusable after flowering, stalk celery is harvested before allowing seed production to begin.

Celery seeds come primarily from leaf celery, forming after the plant produces its tiny white flowers. Seeds are harvested after the flowers have dried and wilted.  Since celery requires a long season to reach flowering size, growing it for seed is practical where winters are mild.

Celeriac (aka celery root, turnip-rooted celery, or knob celery) is cultivated for its large bulbous root. It has a crisp white interior with a rich celery flavor and parsley undertones. Celeriac is grown and prepared like parsnips, carrots, and potatoes. Once peeled it can be eaten raw in slaw or salad, or boiled and mashed or roasted like potatoes.

Garden celery has smaller, shallow roots that grow just beneath the soil surface. You can harvest and eat the smaller roots of common garden celery as well.  The growing period for celeriac is long, so patience is a virtue - roots can take up to 200 days to fully mature.

Celery prefers cool temperatures and cloudy days, thriving between 58°F and 80°F.  In regions where summers are hot and winters are mild, celery can be grown as a fall or winter crop (it's hardy to 10 degrees F).  Further north, it's planted in the spring and harvested later summer or early fall.

When choosing a location, keep in mind that celery plants need partial sun (4 to 5 hours of sunlight a day). Remember that trees may not have all their leaves in early spring and avoid areas that will be too shaded later in the season.  For best results, avoid sites that tend to be dry - celery prefers rich soil high in organic matter that holds moisture well but drains freely.

Before planting, prepare the site by removing debris, loosening the soil, and breaking up any clumps that are larger than an apple.  Add compost or other organic garden mix to provide nutrients for healthy growth.  Celery needs calcium for best growth, so mix in bone meal or gypsum. Bone meal is a good all-purpose amendment. Gypsum has the added benefit of improving the texture of clay soil.

Celery needs attention to be sure it has adequate water and nutrients to grow strong crisp stalks and mellow their bitter flavor.  With adequate sun, water, fertilizer, and patience, you'll be rewarded with an impressive harvest and a sense of accomplishment.

Space celery plants about eight inches apart to enable plants to shade each other as they mature yet allow adequate room for growth. Stagger plantings every two weeks to have celery all season. If growing trench celery, place plants at the bottom of a 3” deep furrow. This will be filled in later in the season when it’s time for blanching.

Celery has very shallow roots and needs constant moisture. Water plants every morning from the bottom to keep soil wet and leaves dry.

Mulching is essential for retaining moisture, especially in warmer weather.

Celery plants need some support so they grow upright and even. As the plants mature, tie the stalks together to help keep them manageable, using twine or strips of cloth.  Check periodically and loosen the ties if they start to cut into the plant as it grows wider.

Celery is a heavy feeder and needs regular feedings for healthy growth. Once plants are established, apply a nitrogen rich fertilizer every three weeks.

Celery takes 4 to 5 months to mature, but you can harvest a few stalks throughout the season

Celery takes 4 to 5 months to fully mature, but you can harvest a few stalks throughout the growing season once plants are 6 to 8 inches high. Simply pull off a few outer stalks and leave the inner hearts intact to continue to grow. At the end of the growing season, cut down or uproot the entire plant before the seed stalks appear. Cut the outer stalks away to use in soups and stews and use the tender inner stalks for snacks and salads.

Pungent vegetables like onion, garlic, and chives ward off aphids and slugs.

Cosmos, snapdragons, marigolds and nasturtiums repel many insects and provide some shade to the soil to assist in moisture retention.

Several edibles make good neighbors by helping to improve growing conditions for each other. Take full advantage of these plant combinations to improve health and vigor:

Spinach can be tucked between celery plants to enjoy the shade from the hot summer sun.

Green beans and peas affix nitrogen in the soil, helping provide celery with a needed nutrient for healthy growth. Be sure to look for dwarf varieties that won’t overshadow the celery plants.

Leeks can be grown in the same trench and earthed up for blanching along with the celery.

Conversely, steer clear of planting corn or asters near celery as they increase the risk of yellow aster disease

All types of celery are deer resistant and usually encounter no serious pest problems. They can be vulnerable to celery leaf miner and slugs during blanching, but if properly wrapped the threat should be minimal.